Annular seals CAN BE STANDALONE SEALFAST® inflatable OR mechanical seals, BUT CAN ALSO INCLUDE A COMBINATION OF SEALS AND A MECHANICAL HOUSING/STRUCTURE TO HOLD THEM IN PLACE AGAINST PRESSURE IN AN ANNULAR SPACE.

Note: If you are looking for our SEALFAST® Inflatable and Mechanical Seals Click Here!

Annular Seals can be designed to create pressure boundaries and holding solutions for a multitude of different annular gap applications. Annular gaps, the space that exists between two coaxial items, require flexible sealing solutions that can come in many shapes and sizes. Mechanical Research & Design, Inc. SEALFAST® elastomers offer the best active-sealing solutions for the long haul. Whether sealing between two double containment pipes, as a seal around pipe wall penetrations, creating a seal or support between two parts, or for grout packing isolation in an annular space, our tools are the preferred solution.  Our products have a proven track record of reliable, long-term performance in the most demanding applications.

What is an Annular Seal? 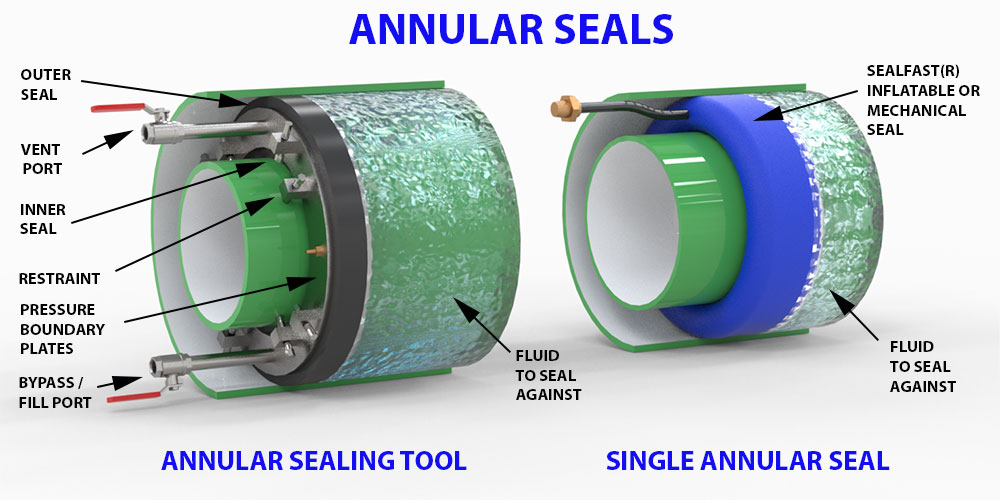 A typical annular sealing tool consists of two SEALFAST® seals, one on the inner perimeter and another on the outer perimeter of the tool. It can be composed of a single piece tool or a multi-piece split tool that can be joined together during installation when obstructions exist or in the middle of long, permanent pipe runs. The two annular seals can be designed to be held in place against the inner and/or outer perimeters of the tool surfaces using a pressure-rated restraint device.

Annular seals utilize either SEALFAST® Mechanical or Inflatable Seals for the inner and outer sealing surfaces. These seals allow for ACTIVE SEALING means to reliably seal irregularly-shaped or unevenly-gapped spaces. They are often used as seals in pipes and tunnels that are used to convey liquids. They can be integrated into long-term installations as a permanent sealing solution or applied temporarily for maintenance, installation, and for the testing of piping and valve applications. The seals themselves can be designed to be a single, continuous ring or split using our proprietary SEALFAST® designs, pending the application requirements.

A single seal can also be used to fill the gap, in certain applications, without the need for additional pressure plates. Our SEALFAST® Inflatable Seals are often used alone as temporary or long-term barriers when filled with air or long-term media such as grouts or epoxies when sealing pressure requirements or low or external restraints can be applied. 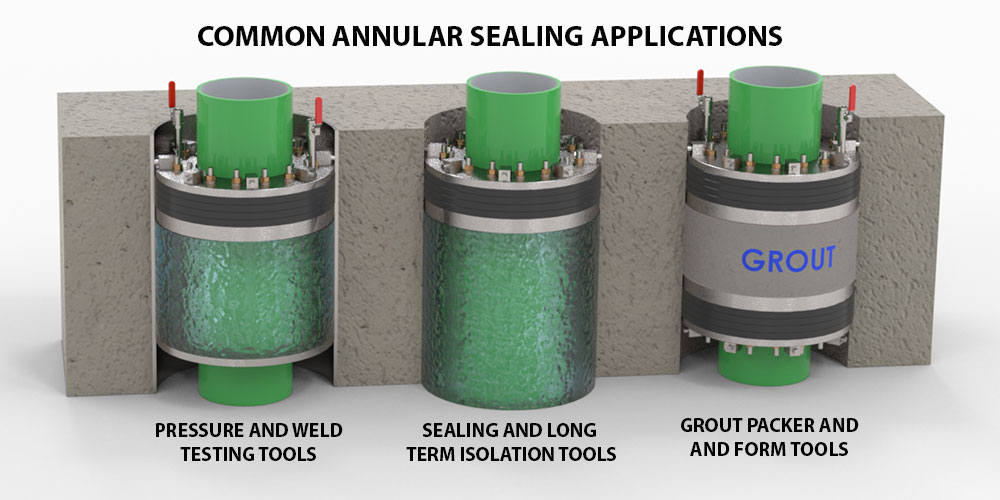 Due to their high level of versatility and effective operation, annular seals and annular sealing tools find use in a variety of applications.

When using double wall containment pipes for hazardous materials such as nuclear and chemical waste, it is critical that both pipes be free of leaks and that any additional medium, such as grout or epoxy, pumped into these regions are leak-free as well.  SEALFAST® Annular Seals and Annular Sealing tools: can act as effective long term pressure barriers between the pipes; can be used to both leak and pressure test both pipes, simultaneously; can be used to leak test grout or epoxy in these interstitial spaces; and can be used as grout or epoxy cure forms allowing these manufactured barriers to set up effectively in the first place.  We can equip any tool with grout fill or vent ports as well as with pressure test and pressure vent ports, making them incredibly flexible products!

These tools can also be used to seal the areas around pipes installed inside of bulk concrete or in other substrate materials. The annular seal is used to create a seal between the outer diameter of the pipe and the inner diameter of the bored tunnel, for example. While basic mechanical and inflatable seals, or adhesives and foams, are traditionally used for this type of installation, they are less reliable because any change of pressure, temperature, or fluid flow can eventually cause them to move, slip, or leak.

Our annular sealing tools contain active SEALFAST® Mechanical and/or pressurized Inflatable Seals, and typically our own proprietary built-in restraint mechanisms, that hold the tool in place long-term when pressure or force is applied.

Similarly, annular seals are often used to seal piping penetrations through walls and barriers to create a leak-tight pass-through, even in irregularly spaced and eccentric piping configurations, which exist in most applications in the as-build world. Once again, single and split annular seal designs are available when there are obstructions, space restrictions, or when sliding a continuous formed seal into place is impossible.

In the construction industry, annular seals are frequently used for the following purposes: to test grouted pipe installations for leaks at joints or through cored holes; as water-stops; as couplings to hold two pipes together; or even as simple forms or supports to hold pipes in place. They can also be used in construction applications to test the integrity of other long-term seals such as grout, epoxy, or other construction filler media.

Another very common use for SEALFAST® Annular Seals is as a grout packer or grouting form, creating a temporary barrier so that the long-term epoxy or grout can be installed between pipes or pipes and cored holes under pressure. The annular seal ensures that sufficient grout or epoxy insertion pressure can be exerted allowing media consolidation to prevent internal air voids.   We design tools that are easily removable AFTER grouting or epoxy operations as well!

Annular seals are often used as temporary or long-term sealing solutions for offshore wipers and packer seal applications, particularly in drilling and mud containment operations. They serve as an easy-to-install environmental barrier at piping, casing, and riser transition points that prevents the leakage of cuttings, mud, and drilling fluids. Our rugged and proven offshore and onshore annular sealing solutions can be found in a variety of locations in drilling stacks and process piping systems including: at reducing sections in bell nipple systems, in adjustable riser systems, as overshot seal housings, and as connectors in flexible or adjustable fluid transfer systems. 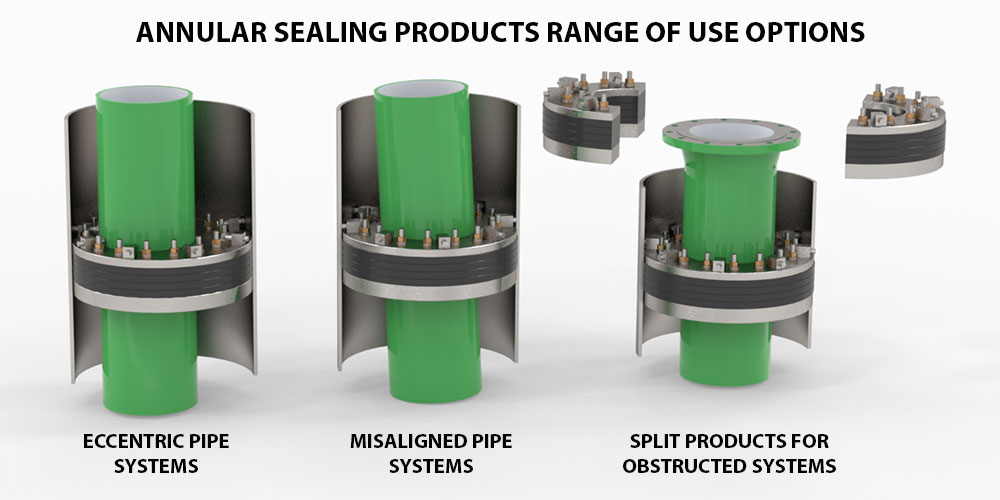 While standard mechanical and inflatable seals are often used as pressure barriers in pipelines, channels, and tunnels to stop fluid flow temporarily or permanently, engineered annular sealing tools provide a safer, more predictable isolation option for component replacement, maintenance, and repairs. Our annular seals are more practical than standard seals for safety and long-term performance as they are designed and tested with your specific use in mind.

Our standalone mechanical seal solutions consist of an engineered elastomer that can be molded or vulcanized at our facility into a single continuous product or split for joining in the field. They are reliable and have been proven to hold up on our standard tools and not rupture easily, which makes them perfect for use in as an annular sealing solution. Mechanical seals can also be reliably installed between uneven surfaces, between irregularly shaped pipes, and can also be molded to fit your exact application geometry.

Inflatable seals, when used as stand-alone products, are typically considered an active sealing technology.  As the user inserts pressure into the seal, it naturally expands easily and evenly into irregular spaces. A standard SEALFAST® Inflatable Seal is commonly filled with such media as: air, water, grout, epoxy, and other common fluids.  Upon inflation to design pressures, the seal expands to fill gap spaces completely, making the seal invaluable for sealing around irregular pipe shapes, eccentric piping configurations, and out-of-reach areas that cannot be accurately measured. When filled with the appropriate grout or epoxy, inflatable seals make a great long-term annular sealing solution as the risk of seal leakage or deflation is greatly minimized.

The Best of Both Worlds

SEALFAST® Mechanical and Inflatable seals are great standalone solutions when placed into piping system annular spaces. Annular Sealing Tools take the benefits of the seals a step further, incorporating two separate seals into a pressure barrier housing and commonly combining them with an integral restraint. One seal is dedicated to the outer perimeter, and the other for the inner, for a more stable and reliable seal overall.  Annular Sealing Tools offer similar benefits to stand-alone Annular Seals, but also provide the tool with a more stable and reliable structure than the  seals alone, typically leading to higher utilization pressure ratings. As with the stand-alone seal options, the complete tool can be designed to be split and separable, allowing make-up in inaccessible and existing piping systems. As mentioned previously, the annular sealing tool also offers a much wider array of proven built-in restraining options so that end-users do not have to develop risky methods of holding the tools in place against pressure.

At Mechanical Research & Design, Inc. we are committed to creating high-quality, reliable isolation and test solutions for our customers in a broad range of industries. Our annular seals and sealing tools are used for isolation and testing for annular spaces; grout, epoxy, and other filler material installations and leak integrity checks; as well as for a host of of other piping system solutions. In addition, they can be relied upon for both temporary and permanent sealing solutions for repair, installation, and maintenance activities in channel and tunnel projects where hazardous or pressurized materials must be contained.

To learn how our annular seals can improve your next project, please request a quote today.

We specialize in custom solutions! Take a look at a few of our proven custom solutions or let us know your requirements. Our engineers and production staff are equipped to travel around the world at a moment’s notice to assist you with your needs!

Contact us today to discuss our rates or to book an appointment with one of our engineers.